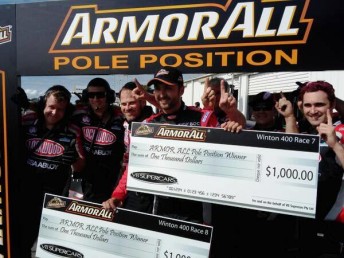 Fabian Coulthard continued his strong form at Winton Motor Raceway with a pair of record-setting pole positions for Races 7 and 8 of the championship.

The Lockwood Holden proved the car to beat in both sessions, recording bests of 1:20.04s and 1:19.65s in the respective 10 minute hit-outs to secure the two poles.

The second effort was more than a second quicker than the time he’d set to top practice on Friday.

Track conditions proved ideal for fast times, with workers having swept the tarmac last night to remove the remaining traces of loose sealant that had wreaked havoc with the early practice running.

Both races will feature all-Kiwi front-rows, with Shane van Gisbergen second in the opening session and Scott McLaughlin the runner-up in the second.

Van Gisbergen had been one of few to complete two new tyres runs in the first session and held sway at the top of the order for much of the going.

The Kiwi was eclipsed by Michael Caruso and then James Moffat as the session drew towards its conclusion, before Coulthard put down his unbeatable time with just a minute remaining.

Van Gisbergen’s second run was good enough for second ahead of an impressive Dale Wood, who scored a career best aboard the third Brad Jones Racing Holden.

The going got even tougher for Red Bull in Race 8 qualifying, with Whincup 21st and Lowndes 23rd.

McLaughlin had held sway at the top for much of the second session having gone 0.6s clear of the field with his first set of tyres.

Coulthard lowered the benchmark by a further 0.25s with 90 seconds on the clock and while McLaughlin improved his time in the dying moments, he could not eclipse the Lockwood Holden.

It was a mixed morning for Ford Performance Racing star Mark Winterbottom, who bounced back from 24th in the first session to be sixth in the second.

Race 8 qualifying was somewhat of a renaissance for the Ford contingent, with David Reynolds, Winterbottom, Chaz Mostert and Scott Pye all in the top 10.

Mostert had been the only Ford in the top half of the Race 7 session.

There was disaster for Russell Ingall as mechanical problems kept the LDM Holden 25th in the first session and unable to turn a lap in the second.

See below for the full Qualifying result for Race 7

See below for the full Qualifying result for Race 8