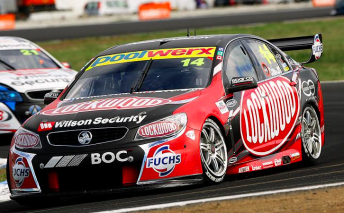 Fabian Coulthard took a commanding victory in an action-packed Race 7 of the V8 Supercars Championship at Winton.

The race was largely processional until its halfway mark, where Scott McLaughlin’s expired Volvo triggered the first Safety Car.

Russell Ingall, running at the back of the pack, used the opportunity to take fresh tyres, and subsequently charged through the field.

The veteran made it to third with three laps to go, before being forced to take a drive-through penalty for earlier contact with David Wall.

The LDM Holden returned to the track in 15th, before charging into an eventual 10th.

The second Safety Car came just a lap after the first restart, with two separate incidents having taken place on the resumption.

A mistake from Chaz Mostert at Turn 1 triggered a multi-car incident that took out the Walkinshaw Holdens of James Courtney and Tim Slade.

The second incident occurred at Turn 6, where contact between Nick Percat and David Reynolds spun The Bottle-O Ford and stranded the HHA Holden against the concrete wall.

The third and final yellow was called to recover the Nissan of Todd Kelly after an engine problem.

That left the race to restart with 10 laps to go, after which it was a tyre conservation run to the finish.

Craig Lowndes fared worst of the front-runners on the tyre front, dropping from third at the restart to an eventual eighth.

Moving in the opposite direction were the Erebus Mercedes-AMGs, with Lee Holdsworth and Will Davison moving from 11th and 13th to fifth and sixth in the closing stages.

Mark Winterbottom was seventh despite pitting for a new left-front tyre following the first restart incident.

“I certainly had my work cut out for me on those re-starts; not just one but all three of them,” said Coulthard post-race.

“The Lockwood car was phenomenal – I had no complaints and good to see my team-mate Dale Wood on the podium and it’s good to see our entire team getting results.”

Van Gisbergen  simply did not enough to challenge Coulthard when it mattered.

“The thing was pretty good then. But it’s so weird the track, all the rubber people was talking about is basically gone now and it’s slippery,” he said.

“Fabian I ran with him, but he was untouchable at the end and it’s a bit of a BJR party and I have done something to spoil it.”

Wood was delighted with his third place; his best result in the main V8 Series.

“I’m not going to do a Scott McLaughlin and not swear, but that was bloody awesome,” he said.

“It was a pretty crazy race as the track was falling to bits and had a coming together with my team-mate. But then when the boys said things were looking good for third, I was a happy man.”

A second 100km race will take place later this afternoon.

See below results for Race 7