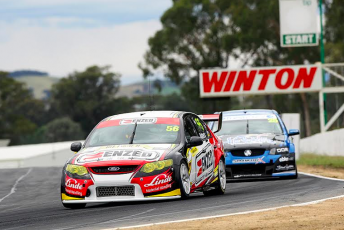 Cameron Waters set the fastest time in both practice sessions

Ford Performance Racing’s Cameron Waters topped both Dunlop Series practice sessions for Round 2 of the series at Winton.

The morning hit-out was, like the early V8 Supercars running, dominated by difficult track conditions as sealant in cracks on the circuit’s surface broke away.

That left Waters’ best of 1:27.1s barely within four seconds of the previous practice lap record.

The pace improved to 1:24.6s in the afternoon session, which ended with a brief rain shower.

“To top both practice sessions is a perfect start and I am feeling very confident about the rest of the weekend,” said Waters, who crashed out of the second race at Adelaide’s season-opener in a clash with rival Ash Walsh.

“We made very few changes to the car and although we didn’t do a huge amount of laps we got through our program as we needed to.

“I’m looking forward to getting out there again tomorrow and making amends for the last race in Adelaide.”

Steve Owen was eighth in his return outing with MWM, one place behind team-mate Andre Heimgartner.

Shane Price was 19th in his return to the class for THR Developments, while Tim Macrow 21st out of the 30 car field on his debut.

The Dunlop Series cars will return to the circuit for qualifying on Saturday from 0930 local time.