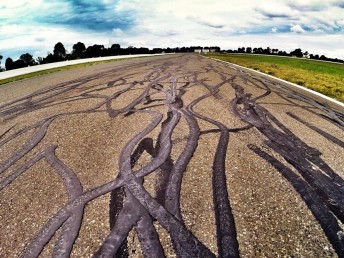 The sealant work prior to today’s practice. pic: Rick Kelly

A specialist sealant firm will arrive at Winton this evening to assess a track failure that wreaked havoc with today’s V8 Supercars practice.

The problem with the sealant was apparent from the outset of practice, with the top section of the rubberised bitumen compound being torn away by the cars, littering the surface with debris.

Circuit manager Adam Ronke told Speedcafe.com that his venue had utilised a different sealant company for its latest works, which were completed earlier this week.

The product, which is installed as a hot liquid before it cools in the cracks, was used on all gaps in the surface at an estimated cost of $20,000.

“We changed the sealing people that we used to a new company that does a lot of motorsport work around the country,” Ronke told Speedcafe.com.

“It appears that the product has failed. Whether it’s a bad batch or what we don’t know, but it (the sealant) has all come out.

“It appears to be fine now (after Friday practice), but we’ve got crews coming that are prepared to work overnight and fix the problem, if necessary.”

A decision was taken to proceed with practice while monitoring the situation.

While the sealant threw a major curveball at teams and drivers as they chased car set-up ahead of the weekend, the day ended with the top 16 cars all under the lap record.

Once arriving at the circuit from Melbourne, the sealant firm will advise on whether repairs need to be undertaken.

Although racing on unsealed cracks would cause damage to the surface itself, leaving the circuit as it finished Friday practice, rather than taking the risk of re-sealing, appears the most likely outcome.

“I stand by the decision to do it (the resealing) because we wanted the track to be in as good a condition as possible for what is our biggest event of the year,” added Ronke.

“We want to present ourselves the best we can to the world. It’s just unfortunate that this company’s product appears to have failed.”