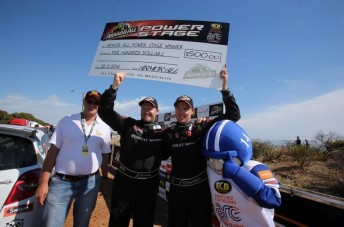 Scott Pedder has finally broken through for a win on the all-tarmac Busselton Super Special Stage, leading home Brendan Reeves and Alan Roe in the ARMOR ALL Power Stage.

Reeves had been fastest through the earlier qualifying stage, seven tenths of a second faster than Pedder.

The Citroens struggled on the sealed surface, understeer a particular problem as both Adrian Coppin and Tony Sullens battled to get turn in on the demanding 90-degree corners that make up the majority of the stage.

That meant Sullens would run as the first car into the stage in the race to grab the three Championship points on offer, his time the slowest of the six from the earlier qualifying run.

Any hopes of improving his time for the Power Stage were dashed off the start line when the car’s electronics kicked in.

“The car has quite a detailed launch control sequence. But the car is setup for gravel, so when I tried to induce a bit of wheel spin to get away from the line on tarmac it just bogged down,” Sullens said.

Second last into the stage, Scott Pedder had the hammer down from the start, blasting away in a cloud of smoke.

Reeves’ time of 2:25.47s, just over a second slower than Pedder’s, handing the Renault driver the Armor All Power Stage victory and maximum points.