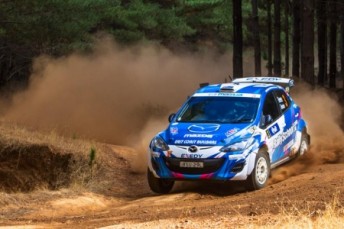 Reeves out to extend his ARC points lead in WA

Brendan Reeves will be the hot favourite to extend his lead in the Australian Rally Championship when the Quit Forest Rally gets underway later today in Busselton (WA).

Aboard his Mazda2, Reeves and other crews first tackle the Armor All Power Stage, a five kilometre shootout of the top six drivers on the waterfront. The Power Stage in Busselton will be run on tarmac on an almost-identical course to the Super Special Stage. Reeves won the Power Stage at the opening round in Canberra in February and backed that up with victory in the event.

Reeves anticipates rough and rocky road conditions for the event and with many of the stages used more than once throughout the weekend. Tyre preservation and avoiding punctures will be a major concern as the roads become more chopped up.

“We are allowed to use buffed gravel tyres for the tarmac stages rather than just our standard gravel tyres,” said Reeves.

“But getting a good balance of the car’s set up will be tricky. During the day the tyres we use are likely to be hot and sticky, whereas at night they are much cooler with much less grip.

“We made some really positive steps with the set up in testing and are constantly finding more grip. The car felt great yesterday and I’m really looking forward to getting out there and resuming our battle with Scott (Pedder) and Dale (Moscatt, Renault Clio).”

Defending Australian champion Eli Evans will not be competing this weekend as he is concentrating his efforts on the European Championship.

The Armor All Power Stage starts at 9.45am (local time) with Heat 1 this evening with two runs of the Super Special Stage in the centre of Busselton, followed by eight stages on Saturday.

On Saturday evening, Heat 2 kicks off with another two runs of the Super Special Stage, with a further eight stages run on Sunday before the winners are crowned.