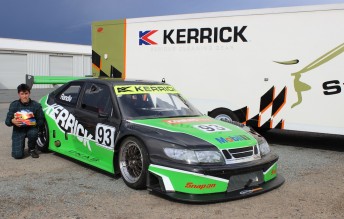 Teenager Thomas Randle has completed his first competitive session behind the wheel of his father’s championship-winning Saab 9-3 in practice for the Sports Sedan events at Winton.

Despite being restricted to six laps, Randle set the second fastest time in the family’s Kerrick Saab behind Grant Doulman, who clocked a benchmark-setting 1:26.4476s.

Randle, who turns 18 on Monday, has emerged from the Formula Ford ranks for what is a one-off drive in the Sports Sedan races, which are not part of the national series.

“The warning light keep coming on so we decided to play it safe and only do a handful of laps even though it is our only practice session,” Randle said.

Randle, who will continue cutting his teeth in Formula Ford this season, is stoked about receiving the opportunity to race the Saab.

“I’ve always been at the race meeting with Dad (Dean) ever since I was a little kid, probably from the age of two,” Randle said.

“He always said to me that once I win a state championship in go-karts he would let me test it. But then it shifted to when I win a national title and it kept getting delayed and now its finally happened.”

The Sports Sedans continue with a 20-minute qualifying session on Saturday ahead of the opening race with three heats scheduled for Sunday.