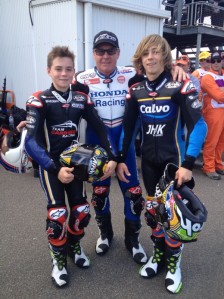 The sons of 1987 world 500cc champion Wayne Gardner are rapidly forging top two-wheel careers while based in Spain.

Remy, 16, will start his campaign in the Moto3 class of the Spanish Championship with Team Calvo on a KTM 250 this weekend at Jerez.

There are also plans for Remy to race in the FIM European Road Race Championship in October at Albacete in Spain.

Remy is also considered a strong chance of landing a wildcard ride in the Moto3 World Championship this season where he hopes to compete full-time in 2015.

“I’m a bit bummed out that my favourite number, 87, isn’t available but I’ve chosen number two as a replacement,” Remy said.

“I’ve had 87 on my bike since my first day of racing, and it is a significant number for our family as it is the year dad won the world championship.”

He’ll compete in the PreGP Moto3 class on his Moriwaki MD250.

“I’m excited about riding in the Copa this year. It’s a really competitive championship and is going to be much harder than anything I’ve raced in before, but I know I’ll learn a lot through the season and am so happy to be back with Team Briefing again,” Luca said.

Wayne Gardner has diligently nurtured the careers of his boys in Spain and is thrilled that backing his come from Phillip Island where he won the first two Australian 500cc bike grands prix in 1989 and 1990.

“Phillip Island Grand Prix circuit brings back so many fantastic memories. For me it’s the best circuit in the world,” Gardner said.

“The first time I saw my boys ride down Gardner Straight was an honour, and very emotional for me, and I’m looking forward to experiencing that again, hopefully many times over.”