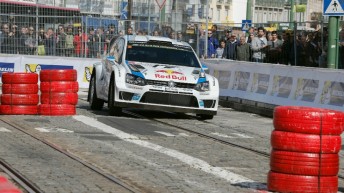 Ogier in front early in Portugal

The Volkswagen driver was fastest by 1.3sec in a Polo R through the 3.27km test on cobbles and asphalt at Praco do Imperio from team-mate Jari-Matti Latvala, with another VW in the hands of Andreas Mikkelsen a further 0.9sec back.

“It’s a good start but the real stuff starts tomorrow,” said Ogier. “We’re here to win the rally but it won’t be easy.”

Thierry Neuville was best of the rest in fourth in his Hyundai i20, 2.9sec behind Ogier. Kris Meeke, whose co-driver Paul Nagle is suffering with an upset stomach, and Mikko Hirvonen completed the top six.

All the top drivers opted for soft compound tyres except Hyundai’s Dani Sordo. The Spaniard was happy to cede a few seconds to save his allocation of soft rubber in case the cool and wet weather continues into the rally.

Competitors make the long journey back to Faro ahead of tomorrow full day of running with two identical loops of six stages covering 136.38km in the hills north-west of Faro.