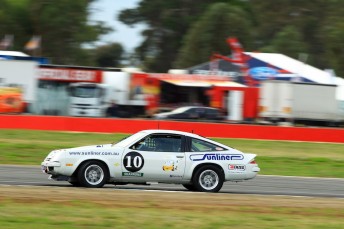 While Hunter’s Monza was well placed inside the top 10, McLeod was only able to complete an installation lap as his team finished the car in the garage this morning.

The anticipated debut of Queenslander Ian Palmer’s Pontiac Firebird has been delayed until Darwin after a pre-round shakedown exposed driveline issues that were unable to be resolved prior to this weekend.

Hunter, who has experience in both a HQ Monaro and Chevrolet Camaro in TCM prior to building his newest car, finished the two sessions in 12th and seventh, respectively.

John Bowe was fastest in the two sessions, run in the dry of the morning and a wetter afternoon session that saw teams switch to dry tyres towards the end.

“It’s just wonderful to drive, even though we have only done a few days here testing it’s by far the best car I’ve driven.

“It’s very balanced, easy to drive and I think has great potential.

“We still have a lot of development to do and we will change some things before qualifying tomorrow, but the early signs are very promising.

“We certainly made the right call to go with the (smaller) 302ci engine rather than anything bigger, so we could run the car lighter.

“We focussed on building a strong car rather than needing to worry about ballast or anything like that. I am very happy.”

Darwin-based McLeod endured a frustrating delay following component supply issues delaying the completion of his car until the last minute.

His team was placing the final details on the distinctive blue XA Falcon – the first two-door XA Falcon to compete in the series – prior to practice this morning. McLeod completed an installation lap in the second session with plans for a ‘testing’ weekend only at Winton.

“We wanted to be here and not just rock up at Darwin, half way through the year, even though we knew it would be a challenge,” McLeod explained.

“This is all uncharted territory for us so we just want to go out this weekend, get some laps and time in the car and make sure it all works. We are very confident in the build of the car, but it is untested.

“We actually want to run around at the back this weekend and get some laps. It will be a gradual process and we are in no hurry, we want to take it slowly and build up gradually as the season goes on.”

The Enzed Touring Car Masters series will tackle qualifying and their first race tomorrow, with a further two races to complete the Rare Spares TCM Winton Cup on Sunday.