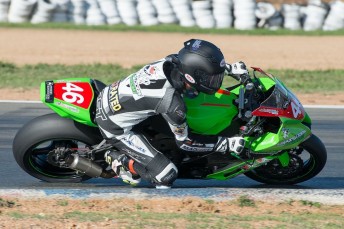 NextGen Motorsports star Glenn Allerton is favourite to take the opening round of the 2014 AirRoad Australian Superbike Championship at Queensland Raceway.

Springwood racer Jones rates the Ipswich circuit among his favourite throughout Australia and is looking forward to returning to the 3.12km circuit.

“I can’t wait to be back in the seat again. It’s good fun and great for developing my skills, and will be great to also be racing in front of a home crowd,” Jones said.

In the Supersport class, defending champion Daniel Falzon is aiming for back-to-back titles.

The South Australian racer recognises Queensland racers Callum Spriggs and Aiden Wagner will be hard to beat on home soil.

“There is a very competitive Supersport field for 2014 and I think riders like Callum Spriggs and Aiden Wagner will be hard to beat at their home track,” Falzon said.

“I am really looking forward to this weekend,” Wagner said.

“It is my home track and I have done a lot of laps there in the dry and the wet, so I am not concerned about the weather.

“Last year I had some problems with my rear shock so this year, in front of family and friends I really want to put it on the podium.”

Another local racer looking to make a return to the podium this weekend is Cleveland schoolgirl Tayla Relph who will take on the boys in the Moto 3/125 class.

The weekend will be a family affair for the 17-year-old, who was a regular podium finisher in 2013, with her father Steven contesting the Supersport class.

Motorcyclists attending the event on Sunday will be invited to participate in a lunchtime ‘Lap of Champions’ which will not only raise awareness for the ‘Cowards Punch’ initiative but also funding.

The AirRoad Australian Superbike Championship will donate $5.00 for each motorcyclist who participates in the ‘Lap of Champions’ at Queensland Raceway on Sunday.

Next Story Allerton's Superpole for BMW at QR