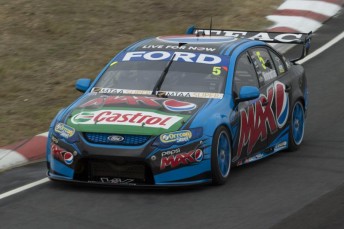 Winterbottom is the only Ford inside the championship’s top half

Ford Performance Racing hopes to homologate a number of improvements for its Falcon FGs this season as the team strives to maintain its place as a front-runner.

Having been Triple Eight’s biggest challenger in recent years, the factory Ford outfit has found itself under siege from the new Volvo and improved Nissan and Mercedes packages during the opening races of 2014.

The Ford’s aerodynamic kit has been the subject of much debate following V8 Supercars’ January 2014 homologation running, which failed to reproduce the rear downforce numbers that had resulted in the Falcon’s wing being trimmed the previous year.

V8 Supercars confirmed last weekend that it will complete more aero testing with its Ford and Holden prototypes in the coming months in order to assess its procedures, which it concedes could eventually lead to re-homologations.

Engine equivalency between teams, meanwhile, has shot to prominence following recent publication of a new horsepower ceiling figure that has sent much of the paddock scrambling to submit upgrades for approval.

Amid its own conversations with V8 Supercars on both of those issues, FPR team principal Tim Edwards says that improving parity of component weights also remains a key area of potential improvement for the Blue Oval.

The situation first came to light early last season, where the inability of several teams, including Ford runners FPR and DJR, to reach the total minimum weight of 1400kg saw the figure increased by 10kg.

After weight-saving efforts last year, Edwards says his cars are currently at the minimum overall figure, but still face a disadvantage due to the ballast others are able to run and place strategically in their cars.

The most obvious discrepancy comes with panels, as rules requiring bonnets and boots to be made out of the same material as their production counterparts ensure steel items for the Falcon against lighter aluminium for their rivals.

Although producing its own aluminium panels is cost prohibitive, FPR is hopeful that mandating minimum weights for all panels across the field, regardless of material or size, could claw back precious kilograms.

The team meanwhile says it is working on re-homologating a raft of smaller, currently original-equipment (OE) items such as headlights, dashboards and radiator support panels.

While the Fords and Holdens have traditionally run standard headlights, the Mercedes and Volvo utilise custom-made units, which are cheaper and lighter than their OE counterparts.

The debut of custom headlights on the Holdens, which is said to save around 5kg of unwanted weight ahead of the front-axle, is understood to be imminent.

The Holden runners have also recently replaced their standard dash panels with new custom-made, carbon fibre units that too save weight.

“There are a whole host of things that we’re talking to V8s about,” Edwards confirmed to Speedcafe.com.

“We are concious of the fact that much of our car was homologated earlier and things have moved on.

“Some of the other cars that we’re racing against have aluminium body panels, which we’re aware of, and we’ve pointed out issues to V8 Supercars because we want to play on a level playing field.

“There are some other changes that other manufacturers have made with non-OE headlights and things like that, where there are potential weight and cost savings.

“We’re looking into all of those aspects for both performance and reliability.”

As previously reported, engine centre-of-gravity is also a current manufacturer parity topic, with testing of engines to take place at Winton this weekend.

Edwards is meanwhile shying away from a public debate about aerodynamic parity.

“Aero is something that, not just us, a few people are concerned aren’t quite right,” said Edwards.

“It’s not a Ford or an FPR thing, there’s a lot of people concerned.

“V8s are looking at it but at the end of the day it’s something that’s out of our control.

“We can’t sit back and use aero as an excuse book.”

FPR’s four V8 Supercars will be on track for three 20 minute practice sessions at the Winton 400.