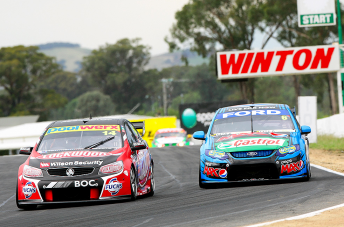 Fabian Coulthard set the fastest time of the day to top the third and final practice session for the V8 Supercars at Winton.

Craig Lowndes sat atop the order when the chequered flag flew, but was soon eclipsed by Coulthard, Lee Holdsworth and Shane van Gisbergen.

Coulthard’s best was more than a second quicker than the previous practice lap record, set by Rick Kelly in 2010.

The top 16 all lapped under the record.

The fast times came at the end of a day that started with drivers complaining of a lack of grip, caused by a recent crack-sealing work at the Victorian venue.

Michael Caruso and Scott Pye caused the two stoppages in Practice 3 with single-car offs at Turn 3 and 7 respectively.

The earlier 20 minute hit-outs were also halted by red flags.

Six Holdens ended Practice 3 inside the top seven, with the leading Nissan of Rick Kelly in eighth.

Scott McLaughlin managed ninth quickest despite continuing to struggle with power steering issues in the Volvo, while 13th quickest David Reynolds was the best of the Fords.

The V8 Supercars will return to the circuit for two 10 minute qualifying sessions and a pair of 100km races tomorrow.