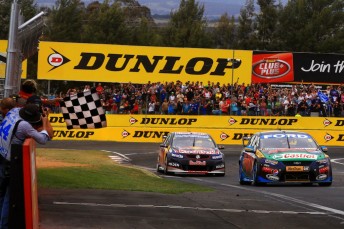 The Supercheap Auto Bathurst 1000 and the AFL grand final are on a collision course in 2015 with V8 Supercars likely to be forced into an awkward retreat from its traditional October weekend.

AFL chiefs have announced that it will be forced to start its season late next year thanks to cricket’s limited overs World Cup, which is using key venues around the country, including the MCG.

It has flagged the likelihood of staging the grand final on October 10, which would put it on the same weekend as the 1000km Mount Panorama endurance classic.

V8 Supercars chief executive James Warburton told Speedafe.com that he will be seeking a meeting with the AFL over the potential clash.

“There was talk of scheduling and obviously we’ll have discussions with the right people at the AFL,” Warburton said.

Complicating the looming conflict of dates is the limited manoeuvring available to V8 Supercars towards the end of the year.

“We’ve obviously got a bit of flexibility around the back end of the year but obviously we’ve got the Gold Coast weekend (traditionally held two weeks after Bathurst) which is pretty set there at the last weekend of October,” he said.

“There’s not a lot of flexibility in terms of where things jam up.”

V8 Supercars is pressing ahead to have a 2015 draft calendar out to in time for the Sandown 500 in September.

“We are still working through the international piece (return to Texas and possibility of a twin race in North America) and everything else and frame up a draft,” he added

“The clashes go both ways as well. There’s a lot of crossover between AFL fans and V8 Supercars fans,” said Warburton.

“The tradition of Bathurst and the strength of it as well.

“I’m sure the conversations will occur and we will take everything into account when when we look at the calendar.”

V8 Supercars has distanced itself from the AFL grand final since its brand was established in 1997, initially by force through the two Super Touring Bathursts, and subsequently by strategic design.

“We’ve got a pretty good week there and it is clear of footy,” he said.

“There’s a lot of history in terms of that weekend for us as well. Really it’s a matter of working through the available options.”

*Stay with Speedcafe.com for all the latest news on V8 Supercars and full coverage of the action from Winton this weekend.