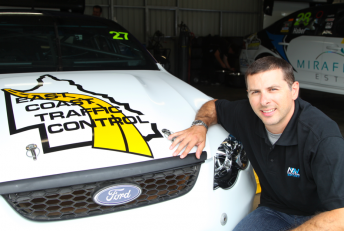 Ford Performance Racing endurance co-driver Steve Owen will rejoin MW Motorsport for this weekend’s second round of the Dunlop Series at Winton.

In a deal sealed on the eve of the event, Owen will step into the team’s ex-FPR Ford driven by Ryan Simpson in Adelaide last month.

Owen joined MWM from the second round last year in place of Chaz Mostert, and had hoped to return for a full campaign in 2014 before the pre-season withdrawal of sponsor Sherrin Rentals.

The Gold Coast-based driver is hopeful of finishing the season with MWM, which also runs cars for youngsters Andre Heimgartner and Morgan Haber.

Owen heads to Winton fresh from co-driving a Porsche GT3 R in the Australian GT Championship last weekend, and will also contest the Spa 24 Hours later this year in a Lamborghini.

“I’ve done a few Thursday afternoon seat fittings in my time so there’s no problem from that side of it,” Owen told Speedcafe.com.

“Global Welding and East Coast Traffic Control have come onboard this weekend to make this possible, so hopefully we can get some good results and continue it for the rest of the year.

“Last year we jumped in at Barbagallo without having seen the car before and we had it on pole first time out.

“I think with a year under our belts we’ll have a good strong showing this weekend.”

This weekend was to mark Owen’s first drive of Mark Winterbottom’s FPR V8 Supercar ahead of the Pirtek Enduro Cup.

Although the recent culling of the co-driver practice sessions will leave him with minimal seat-time in the #5 Ford prior to the Sandown 500, Owen says he isn’t concerned by the change.

“In some ways the reduction of the co-driver sessions plays into the hands of guys like myself,” he said.

“This will be my 17th Bathurst, so the practice laps help but they’re not a big deal.

“The great thing about the Dunlop Series is that it gives you actual race miles, so combining this with the GT events I’m doing, I should be well prepared.”

The addition of Owen headlines a 30 car Dunlop Series entry list for Winton.

The 31-year-old, whose brother Adam won the Development Series in 2006, has modest hopes for the early part of the season before a planned mid-year upgrade to an ex-Garry Rogers Motorsport chassis purchased from Minda Motorsport.

“It’s going to be a real toe-in-the-water exercise for us this weekend,” Macrow told Speedcafe.com.

“It’s a bit of an older car and for us it’ll be about getting the team up and running and trying to finish the two races.

“We’ve only done a 15 lap shakedown pre-event, but it was good to do that because we had a few issues to iron out.

“Once we get into the newer car we’ll be looking to move into the top 10.”

In other Dunlop Series news, South Australian Josh Kean has enlisted the help of Tony D’Alberto as a driver coach this weekend.

Kean’s ex-Walkinshaw Racing Holden has also taken on the #3 plate used by D’Alberto over the last five seasons.

Eggleston Motorsport’s Paul Dumbrell leads the standings by 46 points over Taz Douglas following the opening round in Adelaide.

See below for the full Winton Dunlop Series entry list