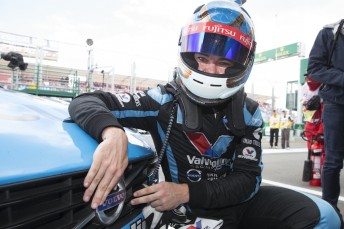 V8 Supercars young charger Scott McLaughlin will co-drive with Stephen Grove in round 3 of the Porsche Carrera Cup Australia Championship at Phillip Island from May 23-25.

The Volvo Polestar Racing V8 Supercar driver McLaughlin will team up with Grove in the Pro-Am endurance format which includes twin one-hour races for round 3 of the series.

It is the only round of the eight Carrera Cup events in 2014 that is running on the bumper Shannons Motor Racing Nationals card.

McLaughlin has starred behind the wheel of the new-for-2014 S60 Volvo in his second year in the main V8 Supercars Championship Series with the Garry Rogers squad.

The Carrera Cup assignment fits in snugly with McLaughlin’s schedule coming a week after Event 5, the Perth 400, of the V8 Championship.

“The cars are fantastic but they look very complex,” McLaughlin said.

“(I’m) Looking forward to having a crack in Stephen’s weapon during the race weekend.”

“I love Phillip Island. It’s fast and flowing and has awesome scenery which is an added bonus – not that you get time to look at it.

“I believe we have a great shot at winning and after talking about it for a long time, I’m very excited to be teaming up with Stephen for the race.

Fresh from an elite class podium at the Melbourne Grand Prix meeting last month, Grove is hoping to benefit from the opportunity to work with one of Australasia’s brightest motorsport talents.

“Scotty is a professional driver and he will bring a professional approach, the ability to get the best out of the car and will be able to help me to further develop my driving,” Grove said.

“I feel that it is important to race and work with as many different professional drivers as possible, especially the calibre of Scott and Earl [New Zealand’s Asian Carrera Cup champ Bamber] to learn from and help develop my racing.”

Despite having carved his career in low-downforce touring cars, Grove expects McLaughlin to quickly find his feet in the agile Carrera Cup machines which have totally different aero, handling and grip characteristics.

“Scotty will come up to speed very quickly in the 991,” Grove said.

“The main difference he will experience is the grip that the new Porsche has which results in faster entry and exits out of corners.

McLaughlin will join Grove for a test session at Phillip Island on April 17.

*For all the latest Carrera Cup news stay with Speedcafe.com