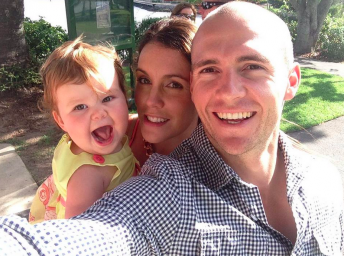 Erebus driver Lee Holdsworth and his young family have escaped shaken but unharmed after an overnight home invasion in Brisbane.

A brazen thief was discovered rifling through a jewellery box by Lee’s wife Alana who began screaming in fear.

“I was in the shower and Alana found a guy looking through her jewellery and for a moment they looked at each other eye-to-eye and then he fled,” Holdsworth told Speedcafe.com

“Alana just starting screaming her head off and was frozen so I bolted out of the shower and initially I thought something must have happened to our 20-month baby Ava or someone had her or something like that.

“I grabbed a baseball bat and ran downstairs but I didn’t want to be in a position where I trapped them because if they had a weapon they would use it.

“So I gave them an opportunity to get out the back door but they had managed to escape from the house by that stage.

“The main thing is everyone is okay and nothing was stolen.”

Police arrived on the scene within minutes of Alana ringing 000.

“They got there within 10 minutes but it felt like an eternity.”

There was evidence the intruder, who is believed to have been acting alone and who fled empty-handed, attempted to enter through the back door.

Police will return to the Holdsworth property this afternoon and comb the house for fingerprints.

*Stay on board with Speedcafe.com for all the news from the V8 Supercars Winton 400 this weekend

See below for the Speedcafe.com Form Guide for the Winton 400