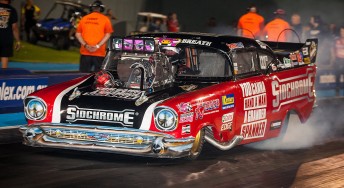 Victor and Ben Bray are pinning their hopes on off-season set-up changes to trigger consistency ahead of the latest round of the ANDRA Top Doorslammer Championship at Calder.

A change in converter set-up has meant Victor Bray has been forced to modify his driving style with the Queensland legend using the opening rounds in Perth almost as test sessions.

Son Ben Bray, who drives a number of categories outside his Top Doorslammer, was able to take the lead and focus on refining the tune-up on the Sidchrome cars.

In preparation for a return to Calder Park this weekend, which will be joined by Pro Stock car and motorcycle, the pair have been testing at their home track of Willowbank Raceway.

“At first it was difficult getting everything just right every time but with a couple of test days under the belt I seem to be coming to terms with the new setup in the drivers compartment,” Victor said.

“It’s not just the burnout and start line procedure that is entirely different, the braking area regime also takes quite a bit of getting used to.

You know what they say about old dogs and new tricks.”

Following an interesting two events in Perth, the Top Doorslammer fancied contenders are playing catch-up in the overall points race which is currently being led by Queenslander, Stuart Bishop.

Defending Champion, John Zappia sits 37 points from the Championship lead in third, whilst Peter Kapiris – considered a favourite at his local Victorian track this weekend is seventh, 52 points off the top mark.

Just 13 competitors have nominated for Calder Park with Tony DeFelice returning to drag racing after an ill-fated tilt at the Bathurst 12 Hour under the Vicious Rumour banner.

A total of 13 competitors have nominated – one of the leanest Pro Stock fields in some time, however it is brimming with quality.

Bundaberg’s Tremayne brothers – four time Champion Aaron and Tyronne return, defending Champion Jason Grima and the always competitive Jason Hedges among others are expected to be tough, however, Bektash will be looking for a good result on home soil.

“Pro Stock is such a close bracket that you can’t be too confident on the outcome for each meeting let alone the season,” said Bektash ahead of round one.

“But we are going in with the confidence that our team and preparation combined with great sponsors we will be strong.

Professional category qualifications begin at 1pm (local time) on Friday, continuing at 12pm on Saturday with eliminations from 3:00pm Saturday.