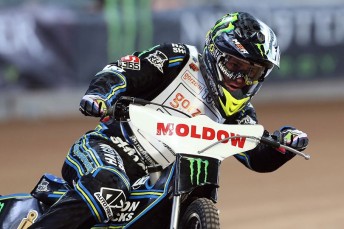 The New Zealand Speedway Grand Prix at Western Springs in Auckland marks the beginning of the 20th season of the World Championship Grand Prix era.

And for the first time since 2005 three Australians will be full-time regulars in the Championship.

The 2012 World Champion, Chris Holder returns after recording his fifth Australian Championship against the odds.

He used the Australian summer as a live test session for SGP this year after spending the back half of last season on the sidelines due to injury.

He and fellow SGP campaigner, Darcy Ward, arrive in New Zealand in red hot form, having claimed the opening round of the European Best Pairs Title prior to leaving Europe for Auckland.

Ward has been working with triple World Champion, Jason Crump on his getaways from the tapes over the Australian summer.

After scraping into the top eight last year despite injury, Ward is hoping that a full season will yield some strong results.

Both are in with an excellent shot of winning the World Championship.

Troy Batchelor, since being granted the final wildcard after the withdrawal of enigmatic Russian, Emil Sayfutdinov, has spared no expense to ensure that his first full-time World Championship tilt will give him the best possible opportunity to remain in the top eight come October. For the first time, Brisbane-raised Batchelor’s father, Steve, will see his son race outside Australia, which will no doubt add another boost to his confidence.

After last year stunning the Speedway world, Australian raised Brit, Tai Woffinden will go into the season rightfully as a favourite to go back to back.

An injury sustained in a meeting last weekend is not expected to hamper his progress, however he has arrived in Auckland suffering from soreness as a result.

Reigning NZ SGP winner, Jarek Hampel is once again anticipated to be right up there come Saturday afternoon, whilst in championship terms, the evergreen 43-year-old Greg Hancock can never be discounted when discussing Title contenders.

After a lean couple of seasons Nicki Pedersen will no doubt be angrier than ever – which is scary for his opposition.

The Dane is frighteningly fast, but his ruthlessness can cost him at times.

Chris ‘Bomber’ Harris adds to the interest from the English side of proceedings and nobody can discount him – however maintaining consistency will be the key to his season.

The 29-year-old German, Martin Smolinski has been granted a full-time wildcard berth for the first time and he promises to be an exciting addition to proceedings.

Kiwi star, Jason Bunyan will line up for the third year as the ‘event wildcard’ at The Springs and will be looking to build on his one point from last year.

#1 Tai Woffinden (GBR): A shock World Champion in 2013, Woffinden will certainly be at far shorter odds than the 500-1 that he arrived in New Zealand to last year. Set a new level for the SGP in terms of explosive fitness last year and showed amazing determination despite being in tears at times whilst competing with a number of broken bones. Back-to-back World Championships have only been won three times in the Grand Prix era, Woffinden can make it a fourth.

#33 Jarek Hampel (POL) : Had his best year in 2013 taking three GP wins and appearing in six finals. Has finished on the title podium three of the last four years. If all goes right, it could be his year.

#88 Niels Kristian Iversen (DEN): Made a strong return to SGP last year finishing third overall. Is as quick as anyone on his day. Is coming into the season determined to get away strongly after a slow start last year. The Danes haven’t won an individual SGP Title since ‘08 and NKI is the most likely to have the Danish speedway luck shine his way.

#45 Greg Hancock (USA):  Made five finals last year, winning one of them. He’s competed in every single Grand Prix since the format’s inception and as he proved in 2011 cannot be discounted despite being the oldest man in the field.  Anything’s possible.

#5 Nicki Pedersen (DEN): The Dane’s 14th season in SGP competition. He thrives on the bad boy tag, is the most ruthless rider in the field. He’ll be looking for a big season after making just four finals last season. Iversen may have the edge on him to be the best placed Dane at the end of the season.

#55 Matej Zagar (SLO): The Slovenian’s fourth fulltime season in 2014 after a return last year. He finished seventh overall in 2013. He’s quick, but has never stood atop the podium in a GP – something he’s desperate to change. Will have a battle to make the top eight with the likes of Holder returning.

#43 Darcy Ward (AUS): Blindingly fast, phenomenal control of the motorcycle, there’s not much more you can say about the Queenslander. Staying on the bike and out of injury will be his biggest battle, but after spending time training with Jason Crump, his enthusiasm should be more directed than ever before. Averaged over 11 points per Grand Prix last year. Definite World Championship contender.
#507 Krzysztof Kasprzak (POL): KK’s been considered a handy campaigner for some time. Has received a wildcard back into the SGP this year after finishing 10th last year. Made two finals in 2013, but will have to do better than his 7.42 GP average if he’s to remain in the GP moving forward.

#66 Freddie Lindgren (SWE): It’s Freddie’s time to shine. The popular Swede enters his seventh fulltime season in SGP. He’s never finished higher than eighth on the points ladder. Underwent a big off-season in Spain training hard and has made some team changes, including opting out of the British Elite League. Talking the talk, can he walk the walk?

#23 Chris Holder (AUS): Still finished 12th, still averaged 11.7 and still made three SGP finals in 2013 despite missing five events of the 12 due to injury. Holder’s proved he’s back in no uncertain terms. He’s got updated Peter Johns engines on board. Look out. CH is hungry and the 2012 Champion is older, wiser and fitter. Could be fireworks between him and Team Forkrent team-mate Ward in the Title battle.

#100 Andreas Jonsson (SWE): The Super Swede AJ has 124 Grands Prix and eight wins to his credit throughout his 12 year SGP career. Always difficult to put a finger on his performance – was World #2 in 2011 and on his day is faster than anyone. After a 5.82 average last season and no final appearances, one has to say he’s lucky to receive a wildcard. Needs to perform.

#91 Kenneth Bjerre (DEN): Hard to believe that Bjerre has just one SGP win in his kitbag. He’s a pocket rocket and always nipping at the heels of the front lads. Qualified through the GP Challenge and considers himself a top five contender. If all goes well, he could be right.

#84 Martin Smolinski (GER): The lone German in the Championship comes in saying he has no nerves. Auckland will be his first Speedway GP. Earnt his place legitimately by going through each qualification event and finishing fourth in the GP Challenge. He may be a surprise packet on occasions, but expect him to battle to get used to the rigours of a Grand Prix campaign.

#37 Chris Harris (GBR): A welcome return for the British favourite. There is nothing that can be said about Bomber other than pure grit and determination. His sole Grand Prix win came on home soil in 2007 in Cardiff and it was Chris Harris personified (look it up on YouTube!). Has finished sixth in the world before, can win races and make the top eight again. Ensuring consistency and scoring points across the season will be his key.

#75 Troy Batchelor (AUS): The Queenslander knows this is his big opportunity. He’s been knocking on the door of a fulltime berth for some years, competing in three Grands Prix in 2011 and one in 2013. Has been meticulous in putting together his equipment for the season ahead, despite getting a very late call up. Lacked some power in his previous appearances. He is an intense, at times, taciturn character. If he can focus on his own backyard, he’ll score a good haul of points and will rightly earn his place for a second season in 2015.

*A 16th Wildcard chosen by BSI-IMG will be added at each round.