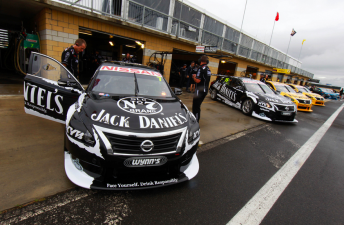 The 2014 season marks Nissan’s second in the category since linking up with Melbourne-based Kelly Racing.

Although Nissan is known to have been approached by non-factory backed teams currently running other brands, Emery admits that any expansion would have to be carefully planned.

“At this point in time, it (one team with four cars) is absolutely the right model to have for our development,” he told Speedcafe.com when asked of the company’s longer term plans.

“I think that people probably underestimate the complications and the commitment that needs to be made to go from four to six, or to go to other teams.

“I think you probably need four cars to really mature as a program quickly.

“I’ll watch and observe this year to see whether there’s upsides or downsides to go upwards or downwards from that.

“I think if you’re a serious manufacturer in this category I don’t think you can do it with less than four cars,” he added.

“Whether you need six or eight or whatever the number is, I don’t know. It’s something I’ll think about this year.”