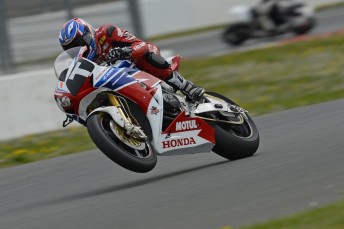 The three factory riders Julien Da Costa, Freddy Foray and Sebastien Gimbert along with reserve rider Jason O’Hallaran were used at the two-day test at Magny-Cours where the EWC starts with the Bol d’Or 24 Hour race from April 26-27.

Following a total of 450 laps the team worked on fuel and tyre strategy for the CBR1000RR Fireblade SP bikes.

The tests follow hit-outs at Mireval, Albacete and Aragon in the lead-up to the EWC season.

Julien da Costa said: “I feel so at home on the bike already. The bike is very easy to ride and we have made a lot of improvements throughout the testing program.

“We have a very good basic set-up and we’ve done a lot of fuel and tyre testing.”