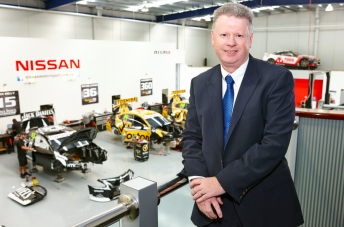 Nissan Australia’s latest CEO has wasted no time in getting to grips with the company’s V8 Supercars investment.

Despite only starting his role on April 1, the former general manager of sales at Mercedes-Benz has already attended three V8 Supercars events with Nissan.

Emery sat down to with Speedcafe.com’s Stefan Bartholomaeus at Symmons Plains to give his thoughts on Nissan’s involvement in the championship.

SPEEDCAFE: Richard, you attended the Clipsal 500 and the Australian Grand Prix as a guest of the team before joining them in an official capacity at Symmons Plains. What are your first impressions of the program?

RICHARD EMERY: Clipsal was my first exposure as you say and it was more telling than the grand prix (which is a Formula 1 event).

For me, when Rick (Kelly) found a way to drag the car to fourth on the Sunday (despite two drive-through penalties) I could see afterward that the team’s attitude was a mix of positivity and frustration.

I think that if they’d had a fourth a year earlier at Clipsal there would have been high-five-ing and celebrations. The fact that there was a steely, not frustration, but determination that it could have been better, says something about the maturity of the program.

I think for me, I was pleased to see that they were past the ‘we’re infants, we’re just trying this stuff out’ phase. If they still had that feeling, they would have been excited about finishing fourth.

They’ve had their testing year and now it’s serious. I was pretty impressed.

SPEEDCAFE: For yourself, you’ve got a background in motorsport, both privately and professionally. You’re obviously convinced that a program like this can work for a manufacturer.

EMERY: It works for some car companies. Obviously it works better when you’ve got some pedigree and some heritage, which the Nissan brand does have.

I think it has an opportunity to add even more value with a brand like Nissan because of its past involvement in Australian touring car racing and its current involvement in other racing around the world.

They not only support the reason that we’re doing it, but also give us a chance to leverage it more than some other brands might be able to, because we do have that background.

SPEEDCAFE: Demographics are clearly important too. You’ve come from Mercedes-Benz, which has a bit of a different view on V8 Supercars at the moment…

EMERY: The demographics are broader at Nissan than they are at some of the other manufacturers.

Having said that, I think V8 Supercars is quite broad in its appeal. There are obviously going to be differences in who turns up at a race, who watches on television and who takes an interest but might not watch every race.

It certainly gives us at Nissan the breadth of the sort of customers that we talk to across our whole model range.

Just as pure exposure to our customer base, it’s a great platform for that. Nissan had a tough run at Symmons Plains, but will return to the scene of its 2013 win at Winton this weekend

SPEEDCAFE: You’re in the midst of some marketing department changes that have impacted the position of motorsport manager. Are you looking to improve how Nissan uses the racing program?

EMERY: I don’t think it’s about improving. Our attitude is that we’ve been through the first development stage of the on-track program and the off-track program.

There’s no doubt that the on-track program is really maturing and now we need the off-track maturity to catch up with that.

SPEEDCAFE: What sort of things will that involve? Is it important to have an strong engagement with the dealer network, as well as what you do front-of-house from a marketing side?

EMERY: I’m certainly going to be talking to the network about what they want out of the program and what they think we should be doing more or less of.

There’s certainly things that we could have been doing that, now that the program is mature enough, we need to implement.

I was at a dealership in Launceston and the perfect example is that the best apprentice technician there could have spent the weekend at the track with the team watching how they work.

Seeing the level of professionalism and the processes that the guys go through are a really good learning experience for someone in our business.

We need to be looking at all of those things to get the dealers involved, absolutely.

SPEEDCAFE: Talking about involvement, the V8 Supercars decision-making structure of Board and Commission includes a lot of input from team representatives, but not directly from manufacturers. Do you see that as an area that needs change?

EMERY: Yes and no. There’s areas of the business where a manufacturer has every right to have input and provide feedback, but there are other areas that we need to stay out of and leave to the team that represents us.

Certainly I’m interested in talking to V8 Supercars about what the manufacturers can do going forward, but that’ll be at the level of discussing areas that have a direct impact on our business.

All of the things in terms of the category management and the sporting side, and to some extent the TV package and all of those type of (commercial) things, to some extent we should stay out of it.

There’s times and topics where we should put our voice forward, but if a category has got 10 items, we’d probably only need involvement in two or three of those.

SPEEDCAFE: At the moment you’re supporting one team running four cars. Is that the model you want to take into the medium to long term?

EMERY: At this point in time it’s absolutely the right model to have for our development. I think that people probably underestimate the complications and the commitment that needs to be made to go from four to six, or to go to other teams.

I think you probably need four cars to really mature as a program quickly. I’ll watch and observe this year to see whether there’s upsides or downsides to go upwards or downwards from that.

I think if you’re a serious manufacturer in this category I don’t think you can do it with less than four cars.

Whether you need six or eight or whatever the number is, I don’t know. It’s something I’ll think about this year. But four is exactly right for the stage we’re at.