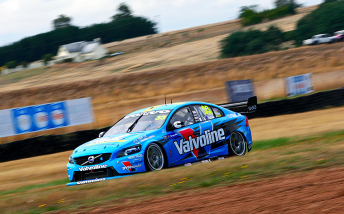 Scott McLaughlin moved to seventh in points across the weekend

Scott McLaughlin says he’ll be aiming to simply bank points around the tight Winton layout this weekend before ramping up Volvo’s title bid on the championship’s higher speed circuits.

The 20-year-old took finishes of fifth, fourth and sixth across the three races at Symmons Plains, moving from 15th to seventh in the points standings as a result.

The solid showing came despite the Volvo team struggling with power steering problems prior to the final race.

Although confident that the issues have now been solved, McLaughlin says the tight nature of the Winton layout will make the weekend another exercise in banking points.

“I think we lack a little bit of front grip compared to our rear grip, so it might be one of our toughest tracks,” he told Speedcafe.com of Winton.

“Tracks like Phillip Island and so on will be good because our car has strong high-speed stability.

“These two tracks (Symmons Plains and Winton) should be our bogey tracks, so to come out (of Tasmania) with a lot of points, I’m stoked.

“With Winton we’ll just try to get through it with as many points as we can and after that, we’ll get to more good open, flowing tracks like Pukekohe, where our championship will really start.”

Although the Volvos are two of 18 cars to use Winton as their nominated test track, the hectic early-season schedule has seen just one – Lucas Dumbrell Motorsport’s #23 Holden – actually undertake running at the venue so far this year.

That leaves Volvo with only the Winton data from its test in December, 2013, where an early evolution of the S60 aero package ran utilising the team’s pre-existing Holden powerplant.

“It went pretty good there, but it’s hard to know because there was no one else there on the day,” added McLaughlin of the test.

“100 percent it will have been of some benefit, but it was pretty much a whole different aero package as well, so a few things will be changed. It’ll be interesting to compare it.”

While the straightline speed of the Volvo was the talk of the paddock at Adelaide and Albert Park, whether the S60s will still enjoy an advantage once the championship returns to the high-speed venues after Winton remains to be seen.

McLaughlin admitted surprise at proving unable to do anything about overtaking Jamie Whincup early in Sunday’s second stint, where the Volvo’s tyres had been a full 20 laps newer than the Holden’s.

“Everyone has been complaining about our straightline and I think he’s got a pretty good advantage as well,” said McLaughlin of Whincup.

“If we’re quick in a straightline then they’re at least as good.

“I think people need to stop worrying about us because they’re slipping under the radar.

“I had really good drive off the hairpin but honestly, once we started plucking gears, I just couldn’t do anything.”