Hyundai satisfied ahead of Portugal challenge

Hyundai satisfied ahead of Portugal challenge 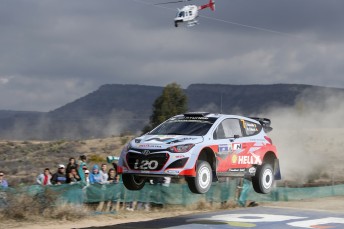 Thierry Neuville soared to an historic podium in Mexico. Hyundai will run a third car at Rally de Portugal this weekend

Hyundai is ready for the test of moving to a third car at the technically demanding Rally de Portugal round of the World Rally Championship this weekend.

Spaniard Dani Sordo and his co-driver Marc Martí are entered under the recently announced ‘Hyundai Motorsport N’ team in the  #20 i20.

The car joins the main #7 i20 WRC of Thierry Neuville and Nicolas Gilsoul and the #8 car which is crewed this weekend by Juho Hanninen and fellow Finn Tomi Tuominen.

Hyundai has used the #8 to swap drivers with the car being driven to seventh place by Aussie Chris Atkinson at the previous round in Mexico.

Atkinson is confirmed for Coates Hire Rally Australia at Coffs Harbour from September 11-14 but the team is yet to specify what other events he will do in the #8 with co-driver Stephane Prevot.

Hyundai has already announced that Hanninen and Tuominen will again take charge of the #8 at Rally Argentina from May 8-11, where the German-based team will return to a two-car entry following Portugal.

The step up to running three cars this weekend is aimed at accelerating development however it has previously been reported that Hyundai will not be in a position to add software and hardware developments to its engines until at least midway through the WRC season.

The addition of Sordo had been locked in before the Spaniard took third place behind Volkswagen ace Sebastien Ogier in the Fafe Rally Sprint, the traditional lead-up to the Rally de Portugal last weekend.

Hyundai realised its maiden WRC podium in its re-entry into the championship after a 10-year absence through Neuville’s third place in Mexico.

Neuville, however, has warned that the i20’s are still not developed enough to challenge the benchmark Volkswagen Polo Rs at the front.

Team principal Michel Nandan said: “Our podium in Mexico was unexpected and a really good reward for everyone in the team, having worked so hard in recent months.

“We have a good combination of drivers in Portugal with Thierry, Juho and Dani; each will bring their own skills and experience to help us in the continued development of the Hyundai i20 WRC.

“Portugal is not an easy event but we have prepared diligently with some positive testing in the region and we have seen that the Hyundai i20 WRC is reliable in those conditions.

“We are ready for this new challenge, although the weather remains an unpredictable but important factor to be considered.”

The rally includes 16 special stages over a total competitive distance of 339.46km.