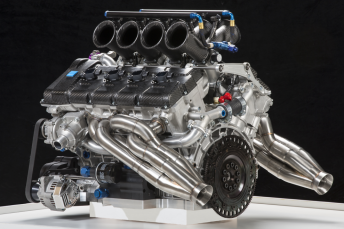 The move, which occurred prior to the weekend’s event at Symmons Plains, follows the latest testing of several teams’ engines on the dyno of V8 Supercars’ appointed engine chief, Craig Hasted.

Rather than attempting to equalise power curves or a peak power figure, the system sees a total performance number calculated from the power output of each engine between 5,800 and 7,450rpm.

Each team is being given their own figure, as read by Hasted’s dyno, as a percentage of the benchmark.

The new ceiling is understood to be higher than that given as a guide to teams late last year following initial testing, ensuring those playing catch-up have even more work to do than first thought.

This is likely the result of the current leading teams increasing development efforts over the summer in anticipation of the final testing and ruling.

The category meanwhile remains yet to finalise engine centre-of-gravity parameters that have been a work-in-progress for some time.

The previous minimum weights for engine blocks and heads were replaced by a total, 200kg, engine weight under the Car of the Future regulations.

The aluminium engines from Nissan, Mercedes-AMG and Polestar all run ballast to bring them up to the minimum weight.

Polestar’s Volvo is said to be running as much as 30kg of weight in its sump, with the low position of the mass providing a minor improvement to handling.

Finalising the COG rules will stop Ford and Holden teams undertaking the expensive process of machining down their blocks and heads to gain a similar ballasting ability.

This practice was seen prior to the introduction of the minimum weights in the previous rulebook, and is understood to be part of Walkinshaw Racing’s current development push.

A frame with which V8 Supercars’ can measure the COG of engines has already been constructed, with testing of engines from each of the category’s eight builders expected to be undertaken before the rules are set.

The category confirmed on Sunday that it will complete more testing with its Ford and Holden Car of the Future prototypes in the coming months to evaluate its testing procedures.