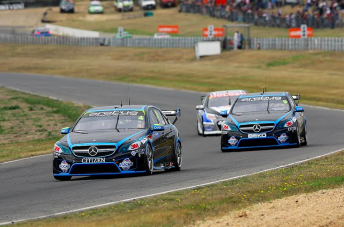 Matching its best-ever V8 Supercars result at the weekend is a critical step in Erebus Motorsport’s bid to secure commercial funding for the balance of the season, says its CEO Ryan Maddison.

The customer Mercedes-AMG operation lost all three of its major sponsors at the end of a tough rookie 2013 season.

Its cars ran largely devoid of branding at Symmons Plains, with minor sponsor Beko’s prominent position on the doors of Will Davison’s entry continuing to be a round-by-round proposition.

Davison, in just his third meeting with the team, took a strong fourth in the Symmons finale, backing up an equally impressive qualifying run.

Although Erebus has been set-up by wealthy property tycoon Betty Klimenko, Maddison stresses that securing commercial sponsorship is vital for the future of the team.

“Betty has said a number of times that she’s funded the capital to get the business off the ground at the beginning, and right now we need to see some return.

“We’ve got a figure like every other team up and down pitlane, whether it’s funded by wealthy owners or a factory (car manufacturer), we’ve got a number that we’re working to and it’s critical that we are able to sell the advertising space.”

Maddison added that a failure to find sponsorship would impact the team’s development budget in the second half of the year.

“There’s no doubt that, if there weren’t significant changes towards the end of the year, we would definitely have to change our initial plan,” he said.

“But that’s the nature of it. If we don’t have the funding to do it in the second quarter and final phase of the year then we’ll definitely need to curtail what we’re doing.”

In addition to boosting its sponsorship hopes, Davison’s fourth place comes as a reward for Erebus’ crew amid the busy first phase of the championship.

Having used its Melbourne GT workshop in between Albert Park and Symmons Plains, the Erebus cars themselves are spending a month on the road between the Australian Grand Prix meeting and next weekend’s event at Winton.

“The front-end of this season, the way that it’s loaded, every Queensland-based team would have had to take some different steps as far as logistics,” he said.

“Fortunately our cars didn’t suffer any damage in Sunday’s race, which makes it easier (to prepare for Winton).

“I’m sure our guys are all looking forward to getting past Winton and back to a normal life for a bit, because it’s literally been a tour.”

Davison and team-mate Lee Holdsworth now sit 12th and 13th in the points standings ahead of Winton.