POLL: Is this the year Lowndes beats Whincup? 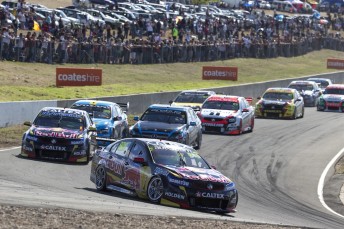 The rivalry between Red Bull drivers Craig Lowndes and Jamie Whincup reached new levels of intensity during a fast and furious Symmons Plains round.

Lowndes survived a gruelling weekend of friendly fire and penalties to retain his lead in the V8 Supercars Championship after six races.

Red Bull has now surged to five wins from the six races in the opening two events of the championship.

Whincup edged Lowndes to pole position in each of the three qualifying sessions in Tasmania.

Lowndes, however, started from the rear in Race 5 after a technical infringement.

His team had placed stickers over two access holes in the front driver and passenger side windows which led to the harsh penalty.

Lowndes, who finished eighth in the opening race behind Whincup, came out breathing fire and brimstone to come from the rear of the field and finish fifth as Whincup cruised to a double.

Following the inspired charge, Lowndes admits that he should be angry more often.

In the longer deciding race, Lowndes pinged off the line and produced a stunning exhibition of controlled driving to dominate the 84-lap affair.

He agrees that he is now in the best place to win an elusive fourth championship.

Amid a high level of adversity Lowndes managed to limit the damage to his position at the top of the ladder.

Even so Whincup was able to make up five positions in the points chase, moving from seventh after Adelaide to be second, 70 points in arrears of Lowndes, as he hones in on a record sixth championship crown.

Will Lowndes’ seemingly renewed grit and defiance lead him to a fourth title or will Whincup make history?