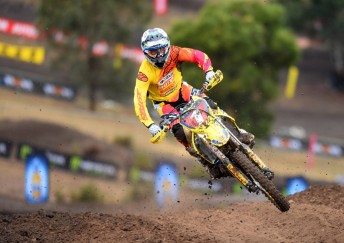 Motul Suzuki pilot, Matt Moss survived a coming together with his brother Jake to take out the opening round of the Australian MX1 Championship at Broadford as part of the Monster Energy MX Nationals.

Jake – who is riding for the rival Kawasaki squad – got the best of the start in the first Moto of the day, however was to fall four laps in and ironically was collected by his brother.

Matt was able to recover and ride home to finish second behind Adam Monea, who claimed redemption for the factory Kawasaki team.

Moss went on to win the second Moto in emphatic fashion from his brother.

In the final race of the day, Matt got the holeshot and looked to have two wins in the bag, before a slight mistake opened the door for Jake to slide through and take the win. He came home seventh overall based on a first race DNF.

In the MX2 category, Kiwi Kane Lamont bookended the day with two wins  and a second place to take the overall victory.

Serco Yamaha racer, Luke Clout got the best of the start with Lamont trailing him. Just when it looked like Clout was going to take the win, his gears failed him, opening the door for the New Zealander to take the win. Clout was able to maintain second.

Brenden Harrison took out the second race of the day narrowly from Lamont, whilst the Kiwi struck back to take the third Moto and the round win from Harrison and another Kiwi in Hamish Harwood.

In the MXD Under-19 Development class, Jed Beaton recovered from finishing fifth in the first Moto to record a pair of wins on his GYTR Yamaha to take the round win.

Nathan Crawford won the first race, but was only able to manage third overall behind his fellow Husqvarna rider, Egan Mastin.

The Monster Energy MX Nationals will resume on April 13 at Appin in Western Sydney.