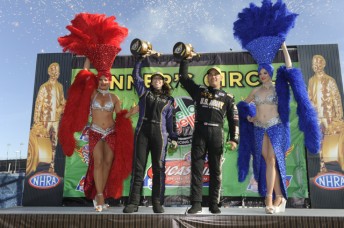 Alexis DeJoria (Left) and Tony Schumacher on the dais in Vegas

Heiress to the Tequila Patron empire, DeJoria took her second career victory in Vegas after earlier this season winning in Phoenix. Ironically, she took the Patron XO Funny Car to Victory Lane after defeating John Force Racing’s Robert Hight – the same driver she was up against in the final round at Phoenix.

“This was definitely a grudge match (with Hight) coming off our win in Phoenix,” DeJoria said. “I was just in shock when we won there. It was gratifying and intense. Today my team gave me a good car and got me down the track first. I really appreciate them so much and all they give up to help this team go racing.”

To advance to the final at the home of Patron’s Head Office, DeJoria had to get by Matt Hagan and both the Pedregons – Tony and Cruz. The win moved her to third on points behind Hight and John Force.

Hight was in his third final of the season having accounted for Jeff Arend, Paul Lee, and Ron Capps on his march to meet DeJoria.

In a great weekend for women in Funny Car, Courtney Force established a new track record in qualifying – a run recorded at 325.7mph (512kph). In Pro Stock, Enders-Stevens returned to the winner’s circle for her seventh career victory. Aside from qualifying third quickest, Enders-Stevens had the perfect weekend – taking victory in the $50,000 to win K&N Air Filters Challenge on Saturday before accounting for Larry Morgan, Steve Kent, Chris McGaha and Jason Line to win the fourth event of the 2014 season. She was awarded $100,000 all up, which included a $25,000 clean sweep bonus from the NHRA for both the round and Challenge win.

Although running a limited 2014 season due to a lack of sponsorship budget, Enders-Stevens walks away from The Strip as the third most successful female racer in NHRA history behind Shirley Muldowney and Angelle Sampey.

“This is storybook. We’ve gone a few years without sponsorship; there were definitely more lows than highs,” she said. It would have been easy to quit. This is definitely a highlight. Next to winning a championship, this is probably the coolest thing in the world.”

In Top Fuel, Australia’s Richie Crampton was eliminated in the first round when he came up against JR Todd. Crampton had qualified sixth fastest on Saturday.

“I’m not angry that we hadn’t won in a long time,” said Schumacher. “I was disappointed, but I understand that you have to make leaps and bounds. Kalitta is running great, Antron is running good, the Alan Johnson (Al-Anabi Racing) cars are going to be bad to the bone pretty soon. We have to keep forcing the issue.”

He got to the final through eliminating Troy Buff, Spencer Massey, and Brown.