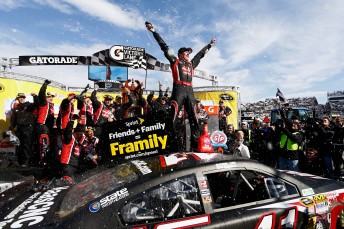 For the sixth time in as many races there is a different winner in the NASCAR Sprint Cup with Kurt Busch beating Jimmie Johnson at the STP 500 at Martinsville.

On a good day for Australia’s Marcos Ambrose, he backed-up his fifth place finish at Bristol a fortnight ago with another top-5 (fifth place) at the half-mile flat track in Virginia.

Busch outdueled Johnson taking the lead from the six-time champion twice in the final 27 laps of the 500 lap journey.

After moving into first on Lap 473, Busch slipped to second 10 laps later, before the Stewart-Haas Racing driver took the lead for good on Lap 490. It’s his first win for the team, second victory at Martinsville and his first success since October 2011 at Dover International Speedway with Penske. It also marked his 25th race win of his career.

It all came after an early race pit collision with Brad Keselowski where he declared over the radio “We’re done for the day”.

“We won, and we’re not worried about any of that nonsense now,” he said after the race. Like last week at California, tyres were a big talking point and Ambrose’s Ford was able to hold onto its rubber on the longer runs which allowed him to be in and around the top-10 throughout the entire race.

The only issues seemed to come on the double-file re-starts where the inside line had a clear advantage. Ambrose had a number of re-starts on the outside and had to show plenty of patience as others drove underneath him. Importantly for the final re-start he had the inside lane and was able to climb onto the rear bumper of Joey Logano for the final run to the flag.

“We spent a lot of money and a lot of effort in getting Richard Petty Motorsports back on the map and I think you’re seeing the results,” said Ambrose.

“We’ve been fast for about four weeks in a row and we’re just starting to hit our stride.  We’re gonna win one of these soon and lock ourselves in the Chase and feel good about our chances.”

The Tasmanian was racing with the Petty family foremost in his mind after the passing of Lynda Gayle Owens Petty, the wife of team owner and NASCAR legend Richard.

“We’ve had a really tough week.  We lost Miss Lynda.  Our thoughts and prayers are with the Petty family right now.  We really wanted to win for them bad out there, but we’ll take a top five,” said Ambrose.

“We’re really proud of our efforts.  We had great pit stops all day.  Our guys probably had their best day on pit road in a long time and Drew Blickensderfer and Derek on the pit box made great calls late in the race and if we would have had another round of pit stops, we might have had something for them.”

The result vaulted Ambrose up sixth places in the standings to 14th.