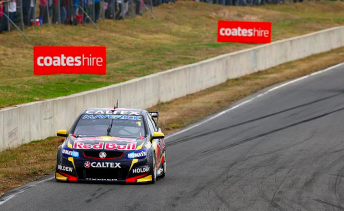 Red Bull Racing Australia again flexed its muscles in Race 6 qualifying, with Jamie Whincup and Craig Lowndes securing the front-row of the grid.

In a repeat of Saturday’s two sessions, Whincup narrowly edged his team-mate around the 2.4km Symmons Plains venue.

The Volvo of Scott McLaughlin and Mercedes of Will Davison will share the second row, ahead of Holden runners James Courtney and Shane van Gisbergen.

A 51.24s best had Whincup just 0.01s ahead of McLaughlin’s Volvo before the 20 minute session’s final green tyre runs.

Lowndes and McLaughlin then briefly bumped Whincup to third in the dying minutes before the five-time champion countered with the fastest time of the weekend to date; a 50.98s..

Seventh and ninth respectively for Tim Slade and Nick Percat ensured Walkinshaw Racing had three cars in the top 10.

Stable-mate Garth Tander, however, will start 24th after missing the bulk of the session with power steering problems.

Faring even worse was Jack Perkins, who found himself in an early-session tangle with Mark Winterbottom at Turn 2.

Perkins had been exiting the pits as Winterbottom rounded Turn 2 on a hot-lap, resulting in significant contact between the two Fords.