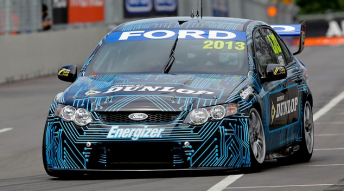 V8 Supercars will perform another aerodynamic test with its Holden and Ford prototypes in the coming months as the category continues to review its parity procedures.

The test has been instigated by the seven-man aerodynamic committee set-up by the V8 Supercars Commission last month.

The committee is, according to Commission chairman Steve Horne, providing a “medical check-up” on the category’s aero process, which involves open-air, coast-down testing.

The move follows a contentious three-car test in January that saw the homologation of the Volvo and an upgraded Nissan against the ‘baseline’ Ford.

An inability to match the previous year’s Ford aero data left many unhappy with the resulting homologations and calling for a retest with all five cars.

“At this stage it (talk of a five-car test) is rubbish because we are just checking the data,” the usually media-shy Horne told V8 Supercars’ website.

“Now, if by some relatively remote chance we find there may have been some error in our datum then everyone will be given the opportunity (to re-homologate).

“We won’t force them to, but if they want to come back and say ‘we would like to be checked again’ (then we will let them).”

Despite the issues in January, Horne confirmed that the Ford and Holden prototype cars, built by V8 Supercars in 2010/11, will be used for the upcoming testing, rather than any of the race cars currently competing in the championship.

While the technology is currently utilised by teams and manufacturers when developing their packages, the homologation relies on the open-air testing.

“Our current aero program takes a one time snapshot really at one speed,” he said.

“It doesn’t build an aero map, it doesn’t check the cars in different angles, or yaw, or anything like that.

“So CFD can potentially be a complementary tool to that and actually can shortcut some of the time that gets spent at an aero test.

“Will we get to CFD? Probably, but it’s not an over-riding magic bullet that is going to change anything really.”