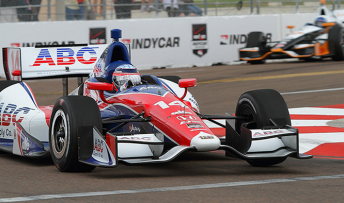 Japan’s Takuma Sato has stormed to pole position for the opening IndyCar series race at the St Petersburg street track in Florida.

Sato (AJ Foyt) maintained his sizzling practice form to storm to the top in the closing stages of the Fast 6 to claim the #1 spot ahead of Ganassi’s Tony Kanaan.

Ryan Hunter-Reay (Andretti Autosport) was third quickest ahead of Australia’s Will Power, the only Team Penske driver to make the final 6.

IndyCar returnee Juan Montoya failed to make it through to Round 2 of qualifying and will start from 18th for tomorrow’s 110-lap Firestone Grand Prix of St Petersburg.