Sharing their Mitsubishi Lancer Evo X RS, the pair survived the gruelling race that claimed several fancied runners early, to take the victory by less than 40s over the Sherrin Rentals BMW 135i driven by Grant and Iain Sherrin.

Just twelve cars finished the tough race with the pole sitting Mitsubishi of Garry Holt and Stuart Kostera amongst the casualties – that car sidelined with mechanical issues on lap 60.

The cars finishing on the outright podium also each won their respective class battles (A, B and C) whilst the Class D battle came down to a fight to the line between two Honda teammates: the Conroy Motorsport pairing of Jake Williams/Geoff Rands edged out the sister car of Kev Herben and Luke King by just 0.2s in the fight for class victory and fifth outright.

Meanwhile Richard Muscat wrapped up a perfect weekend in the Australian GT Championship Presented by Pirelli, sweeping to his second victory in as many starts today in his Erebus Motorsport SLS AMG GT3. The Victorian star had to work his way through the field following the compulsory pit stops and only worked his way into the lead within the last 15 minutes after a competitive battle with Aston Martin driver Tony Quinn.

Muscat then had to hold off a chasing John Bowe in the Maranello Ferrari in the closing stages before he could secure the victory and an early lead in the GT standings.

Bowe and co-driver Peter Edwards finished second in the Ferrari with an impressive drive from Ben Eggleston seeing his Aston Martin DBRS9 ultimately score third and the trophy class victory.

A late race scuffle including Tony Quinn and lapped runner Jim Manolios (Ferrari 458) saw both cars damaged in the closing stages, Quinn losing a potential podium in the process.

Tim Berryman defeated Neale Muston in the final Radical Australia Cup 50-minute enduro today, leading the defending class champion for much of the race before holding him off in a tense finish to the race. 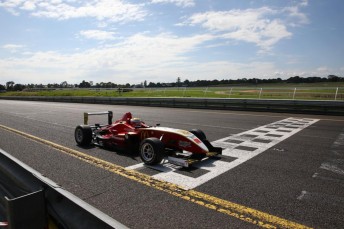 Muston was closing on the leader within the final few minutes of the race however a rare mistake saw him run off the circuit, surrendering any chances of continuing his incredible run of victories in the competitive Sports Car class. 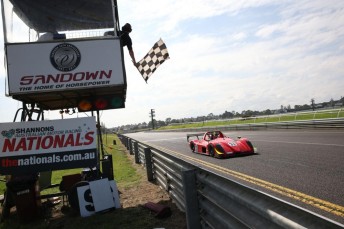 Oliver Smith edged out Robert Baird by just .9s to win the SR3 ‘Race within a race’ battle today.

Ben Gersekowski continued his good form to take out round two of the Formula 3 Australian Drivers Championship, winning both races and the round.

The Gilmour Racing Dallara driver had never won prior to this weekend, but Sandown delivered strong results for the Queenslander and helped close him to within three points of championship leader Simon Hodge.

Hodge finished third in today’s feature race after battling teammate and 2013 championship runner-up John Magro for the duration of the 18-lap feature.

Having contested two races yesterday, the Dial Before You Dig Australian Super Six Touring Car Series concluded their opening round with a final sprint race with Gavin Ross charging from third to first in a single corner mid-race to take the victory.

Two race wins on Saturday, however, was enough for Travis Lindorff to continue his good Sandown form (he won at the circuit last year) and take the round victory ahead of Ross and Kane Baxter-Smith.

The Shannons Nationals continues on the April 25-27 weekend at Mallala in South Australia.