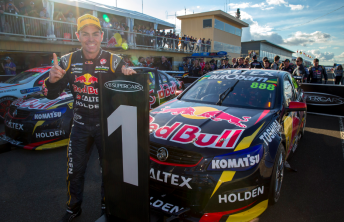 Craig Lowndes took a dominant victory over team-mate Jamie Whincup in the third and final race of the weekend at Symmons Plains.

The championship leader took the ascendancy from pole-sitter Whincup off the grid.

With track position determining the strategies at Red Bull, Whincup joined several others in pitting at the end of the opening lap.

The move ensured the duo ran off-sequence for the early part of the race, an insurance policy against a Safety Car period.

Once the second stops were complete with 37 of the 84 laps remaining, Lowndes enjoyed a near 10 second lead, after which he controlled the race to the flag.

Whincup secured second from James Courtney and Will Davison, who beat Fabian Coulthard to fourth by just 0.12s.

The entire 84 lap, 200km journey ran green for its duration, with each car completing two stops to appease the compulsory fuel drop requirement.

Much of the race’s interest focussed on the battle for second, with Whincup – on older tyres – holding off McLaughlin and Courtney during the second stints.

Courtney emerged from his final stop narrowly ahead of McLaughlin, with minor contact between the pair as the HRT Commodore rejoined tweaking the Volvo’s steering.

McLaughlin was subsequently unable to hold off Davison and Coulthard, who ran long first and second stints in order to have fresher rubber for the end.

Shane van Gisbergen and Tim Slade finished within five seconds of fourth place in seventh and eighth respectively, while Mark Winterbottom and David Reynolds salvaged ninth and 10th from a tough day for FPR.

Further back, it was a horror run for Nissan Motorsport, with its cars finishing line-astern in 19th through 22nd.

The HRT’s Garth Tander completed the field in 25th after losing 11 laps with front-end problems.

The results see Lowndes take a 70 point lead over Whincup, who jumped from seventh to second across the Symmons Plains event, heading to Winton next weekend.