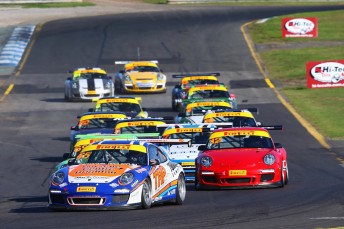 Ross made a solid start in the final race, beating John Goodacre to the opening corner and led until the chequered flag.

He took the round victory from Goodacre and Jon McCorkindale.

“It’s fantastic to get my second round win of the season,” said Ross.

“I love Sandown and I’ve had great success here in the Mustang so it’s great to now get a trophy here in GT3 Cup Challenge.

“I didn’t think I’d have two round wins at this point of the season; it’s a great feeling but we’re remaining grounded as there’s a lot of racing to go.”

Goodacre held off McCorkindale to place second, with McCorkindale third from Marc Cini and John Karytinos, who placed fourth and fifth after a great battle, followed by another tussle between Tony Walls, Michael Loccisano and Jack Falla.

Ross moves to a 43-point lead in the outright standings from McCorkindale, with Goodacre a further two points behind.

Ross’s Class A lead is now 45 points from McCorkindale with Goodacre one point further behind.

After five Class B race wins from six races, Campbell holds a 33-point lead from Miles, with Gartner 15 points further behind.

“Sandown is a really good track for me and it’s great to be so close to the Class A drivers in an older car,” said Campbell, who won Class B from Miles and Gartner.

“I’m naturally a smooth driver so the Porsche certainly suits my driving style, so I can’t wait to get back in it for the next round.”

The next round of Porsche GT3 Cup Challenge Australia presented by Pirelli is scheduled for Mallala Motor Sport Park in South Australia from April 26-27.