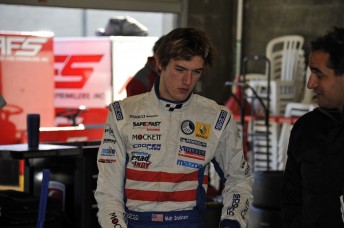 Matthew Brabham will start from third in his first Indy Lights race at the St Petersburg street course in Florida.

The son of Geoff, the eldest of Sir Jack Brabham’s sons, will start off the second row behind Gabby Chaves with Brabham’s Andretti Autosport team-mate Zach Veach second.

The grid was determined by combining times from the practice sessions after storms caused havoc with scheduling and forced qualifying to be abandoned.

“I think we have good speed,” Brabham said.

“It’s a little jumbled up at the moment with everybody trying different things, but I think we’re pretty strong.

“We’ve got a lot of work to do overnight, but we know the right direction to go in, so we’re going to be working hard to make sure we’re the fastest car on track tomorrow.”