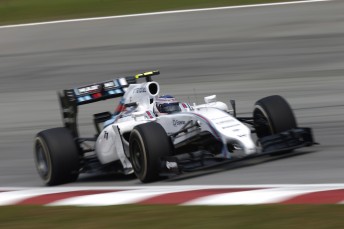 Valtteri Bottas is the first driver to receive penalty points

Valtteri Bottas is the first driver to receive penalty points as part of Formula 1’s new scheme after the Finn impeded Daniel Ricciardo in qualifying for the Malaysian Grand Prix.

The Williams driver was adjudged to have blocked the Australian while on an out lap in the wet Q2 session at Sepang. However, the block failed to hamper Ricciardo’s progress into Q3.

After an investigation the incident, the stewards have slapped Bottas with three penalty points for his part in the incident.

Under new for 2014 guidelines, any driver that accumulates 12 penalty points during the season will be given a one race ban.

Bottas has also received a three place grid penalty for his actions and will start Sunday’s Malaysian Grand Prix from 18th position. This is his second grid penalty in as many races after receiving a five place drop for a gearbox change at Albert Park.

Meanwhile, the stewards have taken no further action regarding the Q2 collision between Ferrari’s Fernando Alonso and Toro Rosso’s Danill Kvyat.

The Russian made contact with the Spaniard at turn 4 causing significant damage to the Ferrari’s front wishbones. Luckily the damage was repaired in time for Alonso to take part in Q3 where he qualified fourth.

“The stewards do not believe either driver were wholly or predominately to blame for the incident,” they said.