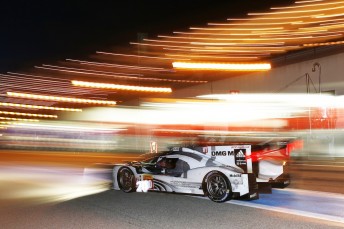 Audi completed the final session in the two-day World Endurance Championship tests on top however Porsche finished with the best overall times in The Prologue running.

However Porsche ended the two-day tests at the Paul Ricard circuit with the top three best times overall through Kiwi Brendon Hartley, Timo Bernhard and Mark Webber who all share the #20 Porsche 919 Hybrid.

Hartley’s earlier time of 1:41.289s proved the best from The Prologue sessions compared to the best diesel time set by Andre Lotterer in the #2 Audi of 1:42.073s.

Porsche logged a total of 3556km during The Prologue as the 919 development program enters its final phases.

“Operating as a Porsche works driver for the first time and in the top class of Le Mans Prototypes was an impressive experience,” Hartley said.

Team-mate Webber classed the tests as a big milestone for Porsche which is re-entering LMP1 competition for the first time since the 1990’s.

“To enter two cars for the first time was a tremendous amount of hard work for the crew on the operational side,” Webber said.

“Smooth running was a well-deserved award and a good tonic for the guys after a long week.

“Every day we run we find more areas to improve, which is very encouraging. The track lay-out at Paul Ricard seems to suit our car very well. I’m curious to find out how we can perform in Silverstone.“

The tests are the final official runs for ahead of the FIA WEC schedule which begins with the Silverstone 6 Hour from April 18-20.