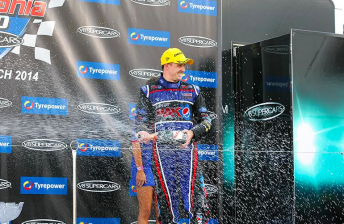 The latter encoutner was highlighted by a storming drive from last to fifth for the second Red Bull Holden of Craig Lowndes, which started at the rear of the field after being excluded from qualifying.

“I think Craig showed his true pace (in that race),” said Winterbottom.

“I think they (Red Bull) are just fluffing around at the front sometimes. When he has to pass he pushes the NOS (Nitros Oxide System) and off he goes!

“I would have made the car wide and made him fight for it (if Lowndes had made it through to third), but we’re just trying to do the best job we can”

Sitting between Whincup and Lowndes in the post-race press conference, Winterbottom also made light of the Red Bull duo’s clash while battling for the lead in Race 4.

“It would be good to see the stewards when Roland (Dane, Red Bull team owner) goes to the them,” he said.

“We’ll get penalised probably for being on Roland’s track or something!

“But it was good… you (team-mates) should be able to race hard.

“That’s what the fans want to see. They don’t want to see two cars following each other to the finish.”