Whincup and Lowndes collide in Race 4

Whincup and Lowndes collide in Race 4 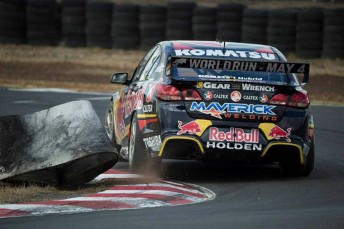 Lowndes had beaten pole-sitter Whincup to the first corner and led until Lap 26 of 42.

The second lap after a Safety Car restart saw Whincup dive to the inside of Lowndes into Turn 6, with the resulting contact bumping Lowndes off the road.

Whincup went on to beat James Courtney to the flag by 0.9s, with Mark Winterbottom completing the podium.

Lowndes fell to a low of 11th before recovering to eighth by the flag.

The incident was investigated post-race, with no penalty applied.

“Its an unfortunate situation,” said Whincup.

“Lowndesy deserved to finish higher than that but I’m not sorry about the move or anything. Rick Kelly endured a wild off after a brake failure

“It was textbook move I was up the inside and was well and truly in there.

“It was a standard move but unfortunately that is the way it goes. Its disappointing we didn’t have a 1-2.”

Russell Ingall converted third on the grid into a fourth place finish ahead of Scott McLaughlin and Garth Tander.

Shane van Gisbergen ran as high as sixth early before dropping to the back with a mechanical black flag for loose rear bodywork.

Assisted by the mid-race Safety Car, the Kiwi charged through the pack to eventually finish 11th.

The cause of the yellow had been a brake failure for Rick Kelly that left the #15 Nissan stranded in the Turn 6 gravel.

Team-mate and brother Todd Kelly was the race’s other retirement, suffering a front-right suspension failure after contact with Jack Perkins.

Perkins eventually finished 22nd after a drive-through for a separate incident with Michael Caruso.

Also in the wars was David Reynolds, who jumped to third off the start before rapidly falling backwards.

He eventually pitted with a punctured tyre, greeting the flag as the last of the runners in 23rd.

Race 5 of the championship, also over 42 laps, will get underway at 1635 local time.

See below for the Race 4 result