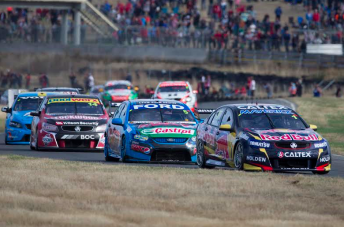 Red Bull Racing Australia eventually elected not to follow through with a protest against Ford Performance Racing following Race 5 at Symmons Plains, concluding a dramatic day of on and off-track action.

Red Bull had raised questions about the legality of the steering column support bracket on second-place finisher Mark Winterbottom’s car after viewing onboard television footage from the Ford.

Following an initial inspection from the Category Technical Manager Frank Adamson, the Holden team took its concerns to the Investigating Officer, Jason Bargwanna, with the intention of lodging a protest.

Red Bull eventually withdrew its actions after being advised that the non-compliance apparent on the footage was the result of a different method of mounting the control support bracket to the car.

A bemused FPR team principal Tim Edwards told Speedcafe.com during the unfolding drama that 70 percent of the field would be non-starters on Sunday if the mounting had been deemed illegal.

The squable had followed the disqualification of Craig Lowndes’ Red Bull Holden from Race 5 qualifying for a technical breach.

A rival team, understood to be FPR, tipped off officials to tape that had been applied over the access holes on Lowndes’ front windows.

Although Red Bull argued the hole still existed and was simply no longer a ‘through-hole’ following the application of the tape, Lowndes was forced to start Race 5 from the back of the grid.

Claiming negligible benefit from the tape, Red Bull had been taken aback by the severity of the penalty.

The squad also lost a debate on the wording and meaning of regulations at Adelaide’s season-opener earlier this month.

There, Jamie Whincup was dealt a drive-through while seemingly on the way to victory after the squad’s car controller touched the car in a pitstop.

The team’s argument that the action did not break the rule preventing car controllers performing
“work” was dismissed.

“The biggest issue here is common sense and when it’s against you obviously your version of common sense is different to other peoples, like what we saw at Clipsal,” Red Bull team manager Mark Dutton told Speedcafe.com.

“For us there have been too many incidents like this. One is too many, let alone really expensive ones like we had today.”

Next Story Winterbottom: Red Bull 'fluffing around' at front