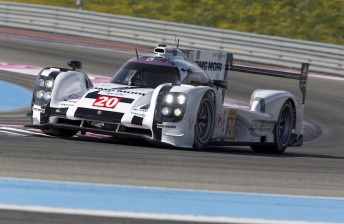 Porsche 919 Hybrids soar in The Prologue runs at Paul Ricard

Kiwi Brendon Hartley established the fastest time as Porsche set the benchmark in two of the three Prologue test sessions at the Paul Ricard circuit in France.

Hartley cracked a 1:41.289s lap in the #20 machine he is sharing with Aussie Mark Webber and Timo Bernhard.

In the afternoon run Bernhard went quickest with a time which ended up being .5s slower than Hartley’s bench-topper.

The second Porsche 919 Hybrid finished the night run second fastest at the hands of Neel Jani who is sharing the #14 with Romain Dumas and Marc Lieb.

The fastest of the LMP2 runners saw Shinji Nakano in the #23 Millenium Racing Oreca Nissan posted a 1:49.246 best.

The opening round of the WEC is scheduled for Silverstone with the 6-Hour season-opener on April 20.