Muscat romps from last to first in AGT opener Muscat’s charge through the field to victory was impressive given he missed qualifying, after the Erebus team diagnosed a broken fuel line in the Mercedes Benz SLS AMG GT3.

The raw speed matched by a strong pit stop strategy from the Erebus team saw Muscat hit the lead by mid-race, ultimately taking a commanding victory.

A late charge from Klark Quinn in the McLaren saw him finish second, ahead of John Bowe and Peter Edwards in the Maranello Motorsport Ferrari 458.

The pole sitting Lamborghini shared by Justin McMillan and Steven Richards was sitting second within the last 10 minutes of the race however a late-race spin saw them tumble down the order.

For the AMChamps Sandown 3 Hour Classic, the starting grid positions are determined by who each team nominates as their starting driver and their fastest qualifying time, Holt nominating to start the three-hour race aboard the Eastern Creek Karts entry.

The Sherrin Rentals BMW 135i topped Class B, Jake Camilleri’s Mazda 3 MPS was the quickest in Class C while Luke King driving a Honda Integra topped the Class D battle.

The Sandown 3 Hour Classic kicks off a season of endurance-based racing for the production car series that includes marquee four-hour events at Phillip Island and Sydney Motorsport Park later this year. 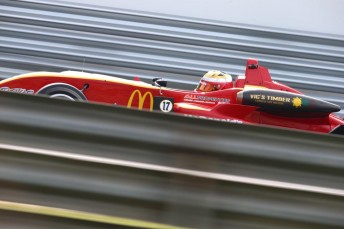 It was Gersekowski’s first win after 74 starts in Formula 3 and came in the series’ 250th championship race.

The pair of Dial Before You Dig Australian Super Six Touring Car Series races were taken out by Travis Lindorff (VT Commodore).

Kane Baxter-Smith (AU Falcon) and Holden driver Gavin Ross also featured on the podium however it was Ben Grice – son of Bathurst legend Allan – who created the biggest news when he rolled on the opening lap of Race 2.

The former Swift series racer ran wide at the top of Sandown’s famous Rise on the back straight and rolled his AU Falcon, however escaped unscathed and walked away under his own power.

The race was red-flagged and later restarted.