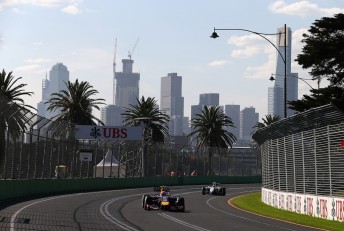 Australian Grand Prix Corporation chief executive Andrew Westacott has confirmed it has discussed the idea of an IndyCar race with the government in the wake of the furore over quieter F1 engines.

The extreme option of severing ties with F1 and moving to IndyCar was floated by AGP chairman Ron Walker, also the head of the F1 Promoter’s Association, in the British paper The Independent.

“It’s s..t,” Vettel slammed. “I was on the pit wall during the race, and it is quieter than in a bar! I think for the fans it is not good.”

Westacott confirmed to Speedcafe.com that the subject of possible options including the American-based IndyCar Series have been raised with the Victorian government.

Contract negotiations with Formula One Management (FOM) have struck several obstacles highlighted by the backlash amid the muted noise levels of the new-spec F1 1.6litre turbo engines.

There have also been concerns over F1 chief Bernie Ecclestone’s offer of a ‘watered down contract’ that compromised the future of V8 Supercars support races and associated entertainment.

It is understood Ecclestone’s motive is driven by flexibility in order to appoint more global partners and not be commercially restrained from local arrangements.

Westacott has confirmed the AGP is in constant discussions with FOM and its legal team in a bid to resolve concerns ahead of renewing another F1 contract for the Albert Park event.

“We’ve been working with F1 for 19 years and we want to have the biggest and best motorsport in the world,” Westacott told Speedcafe.com

“(But) we’ve got a situation here where the chemistry has changed.

“When F1 goes to those European circuits and they are no where near as loud or getting the emotion that the spectators can get from GP2 and GP3, the brand itself is going to be put to the test.

“We are in contract renegotiations and we’ve just got to make sure that we are getting the best product.

“It will probably be shown that the best product remains F1 but IndyCar is also a very, very good product out there in the world and it comes at a fraction of the cost.

“There is a degree of credibility from that point of view. “

Westacott confirmed the government has been briefed on possible options if F1 is lost to Melbourne.

“Generally yes,” he said over the subject of IndyCar being raised with the government.

“Every person who works in events, whether it be a major events company in Victoria or NSW, what we’ve got to do is compare and look at all the options.

“Adelaide has a race that is totally V8s, the Gold Coast used to have Indy and now it has V8s, Homebush has V8s, we’ve got F1.”

IndyCar races were held at Surfers Paradise from 1991 until 2008 with the annual cost to the Queensland government averaging just over $11million since the early 2000s, which is a fraction of what is spent in Victoria on F1.

Westcott says that FOM is beginning to realise the concerns raised by the AGP are valid.

“I think they are realising that there is a lot of fact to the position we are putting to them,” Westacott said.

“You can’t take one element of the chemistry away. It leaves an empty feeling with people (and) at the moment the indication is it is lacking without a higher level of decibels.

“I think the litmus test is going to be Monza, Spa, Hockenheim, Silverstone and Monaco and even this weekend in Malaysia.

“This is a complex issue and Ron makes very strong points and I’m firmly in line with those because it’s the right level.”

*Stay with Speedcafe.com for all the latest news from the Malaysian GP this weekend