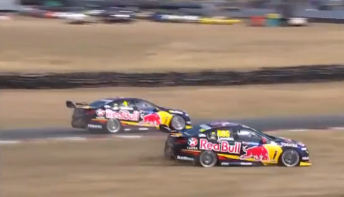 Craig Lowndes and Jamie Whincup insist there’ll be no ongoing fallout from their dramatic clash in Race 4 of the championship at Symmons Plains.

Lowndes was bumped from the lead to 11th place on Lap 26 of 42 in a Whincup passing move that saw the pair make side-to-side contact at Turn 6.

It was the first time that the pair have made significant contact in their eight years as competitive team-mates.

Lowndes was visibly frustrated in the immediate aftermath of the race, before both drivers received a talking to from team owner Roland Dane.

“It was disappointing as we’ve had so many years together with so many great battles and never sort of had something like that,” reflected Lowndes at the end of the day.

“But look, if it wasn’t Jamie you would have put it down as a racing incident. It was just a fact that we were both team-mates and we were both fighting for a win.

“So you know we both apologised and look it was one of those things. I probably didn’t leave enough room and as Jamie was going for the pass.

“We’ve got over, got on with it and we’ll get on with tomorrow as well.”

Whincup immediately appologised to his team for the situation, but made it clear that he was not admitting fault.

“I thought the pass was on. I didn’t feel I did anything bad by Craig to be honest,” he said.

“(But) the situation was that Lowndes was off the track and didn’t get the result he deserved.

“He deserved to either win or come second and that was a very, very ordinary situation unfortunately. So I apologised for that.”

Whincup added that that post-race discussion was vital for clearing the air.

“We just needed to sort it,” he said.

“It was an awkward situation one of the most awkward we’ve had and we just needed to sort it out straight away.”

Dane refused to blame either driver for the incident, but made his displeasure felt.

“I’m just annoyed it was between our cars,” he said.

“They’re not meant to do that and they won’t be doing it again.”