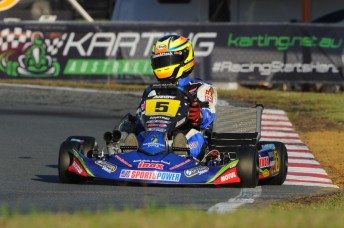 Local driver Scott Sorensen has made a stunning debut to his campaign in the Castrol EDGE CIK Stars of Karting Championship in Ipswich, Queensland.

The 22 year-old then continued this form into heat one under lights on the Ipswich track where he led home team-mate Jarryd Ebzery and 2013 Coates Hire Race of Stars winner Troy Loeskow.

Despite being upstaged in qualifying by Jordie Ford aboard his Vemmekart in the KZ2 Gearbox class reigning Champion Joey Hanssen fired back to dominate the opening 15-lap heat race.
Hanssen crossed the line well clear of Gold Coast driver Chris Hays and Ford.

Sydney-sider Jayden Ojeda claimed pole position for the Tim Craig-led IKD Race Department team in the KF3 class for the second consecutive year in Ipswich. Last year, it was Chris Sandrone who stole the show on debut aboard his Exprit chassis, this year it was Ojeda who qualified fastest before going on to win the opening heat race.

The racing will continue on Saturday with the finals to being in the afternoon and continue through into the evening.

It will be the first time a round of Australia’s elite Karting Championship has been decided under lights.

All of the action from the finals will be streamed live on the link below.