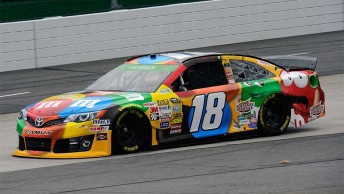 Kyle Busch will start off the pole position for the STP 500 at the flat half-mile at Martinsville in Virginia.

After winning last week at Fontana, Busch qualified with a speed of 160.410 km/h (99.674 mph) with Joey Logano, Jimmie Johnson and Jeff Gordon rounding out the top five.

Joey Logano’s lap in the first round of qualifying of 100.201 mph makes him the first driver in NASCAR’s premier series to turn an official lap at greater than 100 mph at Martinsville. The previous track record was set here last fall by Denny Hamlin (99.595 mph).

Danica Patrick qualified 10th. This is Patrick’s best qualifying effort at a non-restrictor plate track in her Sprint Cup career.

Notable drivers that did not advance to the second round were Brad Keselowski (14th), Ryan Newman (16th), Kevin Harvick (18th), Kurt Busch (22nd), Dale Earnhardt Jr. (26th), Kasey Kahne (27th) and Marcos Ambrose (17th). The Tasmanian on the edge in the session.

“I had some pretty crazy axle hop going into (turn) three there, but we were a little bit desperate,” said Ambrose.

“I took it all the way to the fence, but we’re in the top 20.  We’ve got a decent car.  We’re gonna make the most of it here and see if we can make it a winning car in tomorrow’s practice.”

David Reutimann was the only drivers who failed to qualify.