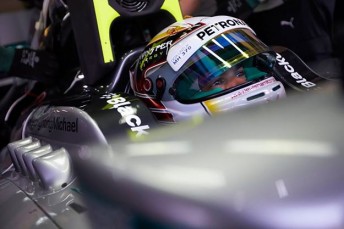 Lewis Hamilton will start the Malaysian Grand Prix from pole position after starring in a truncated wet qualifying session at Sepang.

The Mercedes driver was pushed hard in slippery conditions  claiming pole by just five hundredths of a second from reigning world champion Sebastian Vettel in an improving Red Bull.

Australian Grand Prix winner Nico Rosberg was third fastest ahead of Ferrari’s Fernando Alonso, who was lucky to be involved in Q3 at all, after a collision with Toro Rosso’s Danill Kvyat in Q2 left the Spaniard with front wishbone damage.

The incident which brought out the red flags will be investigated by the stewards.

Australia’s Daniel Ricciardo will start from fifth alongside Kimi Raikkonen.

Qualifying eventually got underway a full 35 minutes later than planned after a monsoon shower delayed proceedings.

Track conditions failed to improve for Q3 but it was Hamilton who stole the show posting an 1.59.431s early on, which was good enough to secure pole.

Vettel, who suffered from a battery issue in Q1, proved to be the Brit’s closest challenger emerging as the only other driver to record a time in 1m59s bracket.

Rosberg was unable to match the pace of his team mate with his Mercedes a full six tenths adrift of pole and narrowly ahead of Alonso’s Ferrari.

Force India’s Nico Hulkenberg impressed throughout the session to secure seventh ahead of rookie Kevin Magnussen.

Despite the treacherous conditions, Q1 didn’t claim any scalps.

However, the session was red flagged late on when Caterham’s Marcus Ericsson lost control at turn 4.

Surprisingly Williams struggled in the wet conditions in Q2 with drivers Felipe Massa and Valtteri Bottas unable to hook a lap together. The pair will start from 13th and 15th respectively, although the Finn will be investigated by the stewards for an alleged block on Ricciardo.