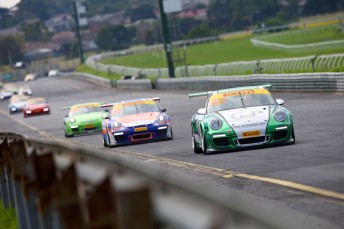 After charging into the lead at the start from the second row, Goodacre held off young chargers Jon McCorkindale and Fraser Ross.

Karytinos eventually prevailed in the tussle to claim fourth.

At the front, Goodacre was able to establish a gap on the field when Ross ran wide on Lap 7 at the third-to-last corner, relinquishing second position to McCorkindale.

The fight for second allowed Goodacre to take the win, while an exciting battle for second ended with McCorkindale holding his position to take second with Ross third.

“It’s great to get the race win today. I’ve only had one win after racing in GT3 Cup Challenge for three years and I hope to get a few more,” said Goodacre.

“Jon and Fraser are great racers and we had lap record pace all race.

“It was great to get the race win and hopefully we can do the same tomorrow.”

“I’ve never been here before however I’ve done plenty of laps here on the simulator,” said Campbell.

“I certainly don’t have the power of the Class A cars but it was good to still compete with some of them, and it was great to get another Class B victory.”

Next Story Muscat romps from last to first in AGT opener